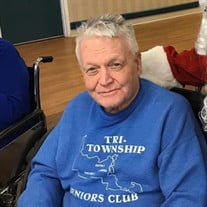 Paul G. Pesola, Sr., age 79 of L’Anse, MI passed away Sunday, November 29, 2020 at Bayside Village, L’Anse, MI. He was born in Hancock, MI on March 8, 1941 the son of the late Rueben G. and Jenny S. (Heikkinen) Pesola. Paul graduated from John A. Doelle School, Tapiola, MI in 1959. He had proudly served in the United States Marines Corp and was honorably discharged after 4 years of service. Paul married the former Judy Kyllonen. She preceded him in death in 2013. Paul had owned and operated Pesola Radiator Repair in Elo, MI that he had purchased from his father in the late 1960’s. The repair shop had been in the family since the 1930’s. Paul retired in 2006. He was one of the founders of the Otter Lake Sportsman’s Club in Tapiola and had been a volunteer firefighter for the Otter Lake Fire Department. Paul was a backyard inventor, enjoyed working on vehicles, and riding his bulldozer. Paul is survived by his loving grandchildren Ryan Pesola of Elo, Jim (Viktoria) Klein of Pelkie, Jasmyne (Tom) Bellow of Chassell, and Airrana Roy of L'Anse, grandchildren Austin Pesola, Hunter and Lily Bellow, and Krimson and Hadley Klein, and his sister Paulette Green of Indiana. Numerous nieces, nephews and cousins also survive. He was preceded in death by his parents, his wife, his daughter Jenise Klein and son Paul Pesola, Jr. Graveside services and military honors will be conducted in the Elo Cemetery, Elo, MI on Saturday, May 8, 2021 at 2 p.m. Paul’s obituary may also be viewed and condolences sent to the family at www.reidfuneralservicechapel.com The Reid Funeral Service and Chapel, L’Anse has been entrusted with the funeral arrangements.

The family of Paul G. Pesola Sr. created this Life Tributes page to make it easy to share your memories.

Send flowers to the Pesola family.