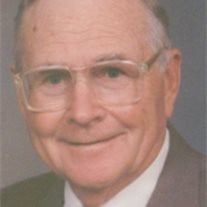 RAYMOND E. McDONALD, 82, of L’Anse, MI. and Harlingen, Texas passed away Wednesday, January 19, 2005 at Valley Baptist Medical Center in Harlingen, TX. He was born in Morse, WI. on July 2, 1922 son of the late Arthur and Jenny (Ingstrom) McDonald. Ray attended school in Mellon, WI. and graduated from Pequaming High School in 1940 as valedictorian of his class. He attended Michigan Tech University for Mechanical Engineering until he was drafted into the Army during WWII and served in Europe and Japan. Mr. McDonald married the former Kathleen McMahon on November 16, 1946. He worked with his father in the logging business and then began his 38-year career as chief engineer for the Pettibone Corporation in Baraga. Ray was a licensed pilot and flight instructor and flew his own small planes. He was a member of Sacred Heart Catholic Church, L’Anse, where he served on the church council, Knights of Columbus, and the L’Anse American Legion Post 144. Ray was an avid square dancer for 40 years. Mr. McDonald is survived by his loving wife, Kathleen; children, Ray (Margaret) McDonald of L'Anse, Mary Ann (Ray) Stott of Sault St. Marie, Barbara (Howard) Huskie of Iron River, Michael (Allison) McDonald of Kingsford, Rose (George) Michaels of Kent, NY, Paul (Sue) McDonald of L'Anse, Jeanne (John) Krenek of Engadine, and Linda McDonald of Green Bay; 21 grandchildren and 10 great-grandchildren; sisters, Irene (Gunnard) Dahl of Gladstone, Arlene (Ray) Van Buren of Skanee, Catherine Johnson of Aura, and Doris Costello of Detroit. He was preceded in death by his brother, Archie. A Mass of Christian Burial was celebrated at 11:00 a.m. Saturday, January 29, 2005 from Sacred Heart Catholic Church, L’Anse with Father Chacko, celebrant. His grandsons honored him as casket bearers. A family interment will take place at a later date. The family received friends from 6 until 8 p.m. on Friday, January 28, 2005 at the Reid Funeral Service and Chapel, L’Anse and for 1 hour prior to the Mass at church on Saturday. The Baraga County Area Veterans, under the direction of the Baraga American Legion Post 444 conducted a military service at 6:30 p.m., Friday evening followed by a rosary service at 7 p.m. conducted by the Knights of Columbus. The Reid Funeral Service and Chapel, L’Anse has been entrusted with arrangements.

The family of RAYMOND E. McDONALD created this Life Tributes page to make it easy to share your memories.