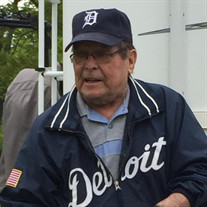 Richard F. “Dick” Pirhonen, Sr., age 87, of L'Anse, MI passed away Sunday, August 4, 2019 at Marquette County Medical Care Facility in Ishpeming, MI. He was born in Nisula, MI on November 29, 1931 the son of the late Leonard and Salmi (Wimpari) Pirhonen. Dick graduated from Baraga High School in 1950. He honorably served in the United States Army during the Korean War. Dick married the former Janice Soli in L’Anse, MI on November 12, 1955. She preceded him in death on May 25, 2019. He had been employed with White Pine Copper Mine for 28 years, retiring in 1982. Dick was a member of the Alston VFW Post #7646. He enjoyed the game of baseball and played for many years throughout his life. Dick was an avid Detroit Tigers and Red Wing fan. He enjoyed spending time in the woods, cutting wood and deer hunting. Dick is survived by his loving children, Richard (Joyce) Pirhonen, Jr. of Toivola, Patty (Tim) Leemon of Marinette and Tammy (Dan) Lesatz of Marquette, grandchildren Sara (Daryl) Eifler of California, Tom Leemon of Colorado and Abby Patrikus (fiancé Jesse Lahti) of L’Anse, great grandchildren Mya, Rylie and Talan. Numerous nieces, nephews and cousins also survive. He was preceded in death by his parents, sister Elsie Lorraine, brothers Stanley and Eugene and great grandson Austin Eifler. Funeral services for Dick will be held at 11 a.m., Thursday, August 8, 2019 at the Reid Funeral Service and Chapel, L’Anse, MI with Pastor John Ansell officiating. The family will greet friends at the funeral chapel on Thursday from 10 am until the time of the funeral service. Immediately following the funeral service, the family invites friends to join them for fellowship and a luncheon in the Harrington Gathering Room, located at the funeral home. Military honors, under the direction of the Baraga American Legion Post #444 and graveside funeral services will be held in the Nisula Cemetery on Thursday at 1 p.m. The family would like to express a special thank you to the Marquette County Medical Care Facility for the wonderful care they showed their father. Dick’s obituary may also be viewed and condolences sent to the family at reidfuneralservicechapel.com The Reid Funeral Service and Chapel, L’Anse, MI has been entrusted with the funeral arrangements.

The family of Richard F. Pirhonen Sr. created this Life Tributes page to make it easy to share your memories.

Send flowers to the Pirhonen family.