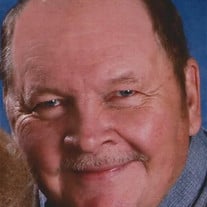 Ronald J. “Ron” Niemisto, age 72 of Pelkie, MI passed away on Thursday, April 18, 2019 at the Baraga County Memorial Hospital. Ron was born in L’Anse, MI on July 12, 1946 the son of the late Bruno and Hilma (Ylitalo) Niemisto. He graduated from Baraga High School in 1964 and attended Welding School at Northern Michigan University. Ron served in the Michigan National Guard and was sent to Detroit during the Riot of 1967. He married the former Jean Kemppainen at St Ann’s Catholic Church, Baraga on November 9, 1968. He had worked at several local welding fabrication shops then worked at White Pine Mine. He retired from White Pine after 25 years and then finished his work career at DesRochers Brothers as a welder, retiring in 2009. Ron was a member of St Ann’s Catholic Church, Baraga and a former member of the Pelkie Fire Department. He enjoyed anything outdoors, fishing, playing horseshoes, camping, cutting fire wood, cutting the grass and traveling out West. He was an avid Green Bay Packer and Detroit Tiger fan. Ron is survived by his loving wife of 50 years, Jean Niemisto of Pelkie, children Carolyn Paavo of Troy, MI and son Aaron Niemisto of Pelkie, grandchildren Hilary Paavo of Walled Lake, MI and Kaitlyn Shepherd of Troy, MI, sister Mary Tikkanen of Pelkie, step-sister Mary August of Green Bay, WI, numerous nieces, nephews and cousins, brothers-in-law Alan (Lois) Kemppainen and their children and grandchildren, Robert (Charlene) Kemppainen and their children and grandchildren, sisters-in-law Lynn (Mike) Maki and their children and grandchildren, Julie (Dennis) Velmer and their children and grandchildren, Pat (Terry) Spencer and their children and grandchildren and Jackie (Rick) Devine and their children. He was preceded in death by his parents, sister Helen, brother Wilfred, stepfather William Erickson, stepbrother Bill Erickson and mother-in-law and father-in-law Eileen and Wesley Kemppainen. A Mass of Christian burial will be celebrated at 11:00 a.m. on Friday, April 26, 2019 from St Ann’s Catholic Church, Baraga with Father Corey Litzner, celebrant. The family will receive friends at the church on Friday from 9:00 AM until the time of the Mass. Immediately following Mass, graveside military honors and interment will take place at the Pelkie Cemetery. A luncheon will be served in the church hall following the interment. Ron’s obituary may also be viewed and condolences sent to the family at www.reidfuneralservicechapel.com The Reid Funeral Service and Chapel, L’Anse, MI has been entrusted with the funeral arrangements.

The family of Ronald J. “Ron” Niemisto created this Life Tributes page to make it easy to share your memories.

Send flowers to the Niemisto family.