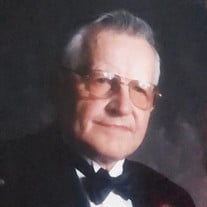 Roy W. Mannikko, age 94, of Watton, Michigan, passed away on Thursday, April 4, 2019 at Aspirus Hospital, Iron River, Michigan after a brief illness. Roy was born on April 29, 1924 in Sidnaw, Michigan to the late Aila Syrjala and Victor Manikko. He graduated from L’Anse High School. Roy married Ruby M. Fountain on April 22, 1950 in Sault Ste. Marie, Michigan. She preceded him in death on October 3, 2007 after 57 years of marriage. Roy was a member of Trinity Lutheran Church in Covington, Michigan. He was retired from White Pine Copper Mine where he worked for nearly 30 years. Roy was also a long-time member of the Lions Club and was very involved in many of the club activities. In his younger years, Roy enjoyed traveling, hunting, fishing and gardening. He also enjoyed playing cribbage and watching westerns and polka shows on tv, with his favorite program being the Molly B Polka Party. Most of all, Roy loved spending time with his family. Roy is survived by his sister, Bernice Cardew; his children James (Candy) Mannikko of Painsdale, Michigan; Ellen Shultz of Ewen, Michigan; Michael (Rebecca) Mannikko of Menasha, Wisconsin; Bruce (Shelly) Mannikko of Essexville, Michigan; and Jill Olesnevich of San Pedro, California; and grandchildren Donald, Corrine, Jeremy, Stephen and Jacob. Roy was preceded in death by his wife Ruby, two sons Donald and Dale, and two sons-in-law Kevin Shultz and Craig Olesnevich. Funeral services for Roy will be held at Trinity Lutheran Church, 12677 Highway M28, Covington, Michigan 49919 at 11:00 a.m. on Friday, April 12, 2019, with Pastor Aaron Gehrke officiating. The family will receive friends at the church on Friday from 10:00 a.m. until the time of the funeral service. The family invites friends to join them for fellowship and a luncheon in the church hall immediately following the funeral service. Interment will take place in the Covington Cemetery. Memorial contributions in Roy’s honor, may be directed to Trinity Lutheran Church, Covington, Michigan. Envelopes will be available at the church. The family would like to thank the entire staff of Victorian Heights Assisted Living Facility in Crystal Falls, Michigan, with special thanks to Lisa, Sharon and Lindsey. Roy could not say enough good things about you and your facility. A special thank you to Aspirus Hospital in Iron River, Dr. Han, the nursing staff and the many others who helped the family during this difficult time. Your care and compassion was outstanding during Roy’s brief hospitalization. The Reid Funeral Service and Chapel, L’Anse, MI has been entrusted with the funeral arrangements.

The family of Roy W. Mannikko created this Life Tributes page to make it easy to share your memories.

Send flowers to the Mannikko family.