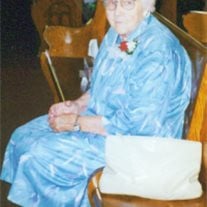 SARAH E. SMITH, 90, of L’Anse, passed away Wednesday, June 23, 2004 at Covington Rest Home following a lengthy illness. She was born in Shelbyville, Kentucky on February 11, 1914 daughter of the late Charles and Elizabeth (Haller) Spurrier. Sarah attended school in Indiana. In 1933 she married John Smith in Detroit, MI. He preceded her in death in 1961. She was employed by the Sacred Heart Catholic School, L’Anse as custodian for many years. Sarah was an active member of Sacred Heart Catholic Church, L’Anse, and Third Order of St. Francis. During WWII Sarah was an active volunteer, and was honored as a regular blood donor and also knitted items for the soldiers distributed through the Red Cross. In addition , Sarah's giving nature was demonstrated in service to the community through many years of dedication to the St. Vincent DePaul Society providing transportation and other needed services to the area. Mrs. Smith is survived by her children, John (Jack) (Darliene) Smith of L’Anse, Gerald (Judy) Smith of TN., daughter, Marion Smith of Calumet, grandchildren, Steve, Jodi, Sue, Barbara, Mary, Terry, Robert, Ronald, Jack, Ann and Jennifer, many great-grandchildren, and sister, Louise Fowler of Oregon. She was preceded in death by 2 daughters and 1 son. A Mass of Christian Burial was celebrated at 11:00 a.m. Tuesday, June 29, 2004 from Sacred Heart Catholic Church, L’Anse with Father Greg Heikkala officiating. Interment took place in the Mt. Olivet Cemetery, Detroit, MI. The family received friends at the church on Tuesday from 10:00 a.m. until time of the service. The Reid Funeral Service and Chapel, L’Anse has been entrusted with arrangements.

The family of SARAH E. SMITH created this Life Tributes page to make it easy to share your memories.

Send flowers to the SMITH family.