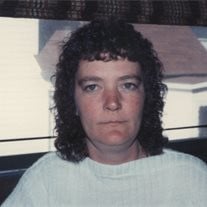 SHIRLEY ANN Mc EWEN, age 60, of L’Anse, MI passed away Monday, January 27, 2014, at her home, surrounded by her loving family. She was born in L’Anse on January 16, 1954, the daughter of the late Edward and Evelyn (Roberts) Schjoth. Shirley attended school in L’Anse. She married Gerald McEwen on January 22, 1972. Shirley was a member of Sacred Heart Catholic Church. She enjoyed knitting, cooking, camping, and just sitting around the camp fire. Shirley loved her dogs and cats. Her grandchildren were the light of her life. Shirley is survived by her loving family; husband Gerald, children Jerry (Barb) McEwen of L’Anse, Billy Joe McEwen (Lisa Vokoviak) of Baraga, and Dawn Marie McEwen (CJ Ollila), grandchildren Jonny, Bradley, Sean, and Kaylin McEwen, and Kaylee Ollila, brother Richard Schjoth of Baraga, and sister Betty Saari of Baraga. Numerous nieces, nephews, and cousins also survive. She was preceded in death by her sister Mary Ann, brother-in-law Edward, and her brothers Edward, and John. A celebration of Shirley’s life will be held at the L’Anse VFW Club on Friday, January 31, 2014 from 5 p.m. until 8 p.m.

The family of SHIRLEY ANN McEWEN created this Life Tributes page to make it easy to share your memories.

Send flowers to the McEWEN family.