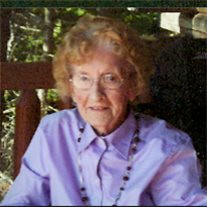 Sophie Supanich of L'Anse went to be with our Lord on December 23, 2009. She passed away at her cozy home where her son and daughter cared for her during her recent illness. Sophie was born in Hibbing, MN (Iron Range area) on April 30, 1916, to the late Josephine (Muvrin) and George Glad. She graduated from Cherry High School and later moved to Chicago where she resided until she married Rudolph Supanich. They were married on August 29, 1942 at St. Jerome's Catholic Church in Detroit, MI. In 1943, they moved to L'Anse. Sophie was a wonderful mother and wife; in 1965, she went to work as a cook at the L'Anse schools, where students and staff alike remember Sophie as a very good cook. She retired in 1985 and was ready to travel with her son Peter and visit her daughter Susan and son Rudy more often. They traveled to Europe on the Queen Elizabeth II, visited Italy, Morocco, England, the Caribbean, and Hawaii several times, plus she toured Croatia with her sister Goldie. Sophie went to Las Vegas with her sister Mary and danced at all her grand children's weddings. She enjoyed cooking, fishing, gardening, bingo, sewing, knitting, cards, painting, and metal detecting. She appreciated music, entertainment, both film and sport, and loved to see new places, followed current events and see her family, whom she spoiled all their lives. Sophie was preceded in death by her husband Rudy in 1987 and her son Rudy John in 1995. She was the 3rd oldest of nine siblings. One brother, George Glad, a sister Mary Merila of Hibbing, MN, and a sister Fran Hansen of Ocala, FL. survive her. Also preceding her in death were Antoinette Radovich, Kay White, Joe Glad, William Glad, Goldie Glad, and Josephine Thomas. To cherish her memory, Sophie is survived by her daughter Susan Blanchard and son-in-law Gary of North Carolina, son Peter Supanich and daughter-in-law Amy of L'Anse, MI. and her daughter-in-law Susan Gersch Supanich of Grand Rapids, MI. Her eight grandchildren, Tanya Willett, John Blanchard, Aaron Blanchard, Daniel Blanchard, Shaun Supanich, Patrick Supanich, and Joe Supanich, Rudy Joe Supanich and 13 great-grandchildren survive. Sophie was an active member of Sacred Heart Church, St. Rita's Circle, and a member of MARSP. She was able to live alone, enjoy her home, hobbies and family. We will certainly miss her and will all treasure our memories. Funeral services were held at 12 noon on Tuesday, December 29, 2009 at Sacred Heart Church, with Father John Longbucco officiating. A lunch followed in the Church hall. Interment will be scheduled for June 2010. The family received friends at the Reid Funeral Service and Chapel on Monday, December 28, 2009 from 4 until 7 p.m. and at Sacred Heart Church one hour prior to the Mass on Tuesday.

Sophie Supanich of L'Anse went to be with our Lord on December 23, 2009. She passed away at her cozy home where her son and daughter cared for her during her recent illness. Sophie was born in Hibbing, MN (Iron Range area) on April 30, 1916,... View Obituary & Service Information

The family of SOPHIA M. "SOPHIE" SUPANICH created this Life Tributes page to make it easy to share your memories.

Sophie Supanich of L&#39;Anse went to be with our Lord on December...