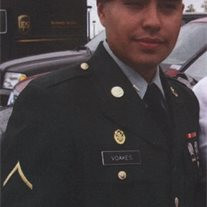 SPC. ROBERT L. VOAKES, JR., age 21, died on June 4, 2011 while supporting Operation Enduring Freedom in Afghanistan, He was serving with the 164th Military Police company, 793rd Military Police Battalion, 3rd Maneuver Enhancement Brigade, Alingar District, Lagham Province, Afghanistan. Voakes’ company nicknamed “the Arctic Enforcers”, had deployed to Afghanistan in late March for a one-year tour from Ft. Richardson, Alaska. Our precious son Robert Lee, Nigig-enz (Little Otter) was born February 26, 1990 at Portage Hospital, Hancock, MI. He was a member of Holy Name of Jesus Church, Assinins, MI, and the Keweenaw Bay Indian Community. An active member of the community, Robert was involved in Boy Scouts, basketball, football, KBIC Rez Runners, youth hockey, KBIC youth programs, and was a KBIC tribal police cadet. He was President of KBIC Youth Club. Robert was very active with cultural activities. He was honored to be chosen as Head Youth Dancer. He valued his Native American heritage and enjoyed attending Powwows and dancing. Robert attended the local schools. He graduated from Baraga High School in 2009. At BHS Robert was active in the drama club, basketball, football, high fi mentoring and the International Club which enabled him to tour Italy. Robert enjoyed school and had great respect for his teachers and support personnel. Robert had many interests and enjoyed life. He had his own unique style of dress and his friends were drawn to him by his friendly disposition and humor. He was a blood donor, and he also donated his hair to Locks of Love. His “baby” was a 1976 black Coupe DeVille Cadillac, the other family members were a Mercedes Benz S 500 and Mr. Biggles Worth his pet fish.. He loved music, which included songs by a fellow soldier, Danny Ricco. Those who knew Robert, knew him as a role model and as an inspiration. Robert had achieved many goals and had many aspirations for his future. Robert is survived by his parents, Robert “Beaver” and Valerie (Boyette) Voakes, brothers Jeremy Voakes and Christopher Voakes, sisters Nancy Voakes and Miranda (Jeremy) Forcia all of L’Anse, grandmothers Fanchon (Picard) Boyette of Milw, WI., and Annabelle DeCota of Baraga, nieces Sydni Voakes, Josilyn Voakes and nephew Brendon Friisvall. Numerous aunts, uncles, and many cousins and close friends also survive. He was preceded in death by his grandfathers, and an uncle. Our baby, Robert is profoundly missed. We love you. Forever our warrior. Military funeral services for SPC. Voakes were held at 11 am, Monday, June 13, 2011 from the Baraga High School Gymnasium, Baraga, MI. The family received friends on Sunday, June 12, 2011 from 10 am until 8 pm at the Reid Funeral Service and Chapel, L’Anse and at the high school gymnasium on Monday from 10 am until the time of the service. Interment took place in the Pinery Cemetery. Following the services, the family invited friends to join them for fellowship and a luncheon at the Baraga Armory.

The family of SPEC. ROBERT L. VOAKES, JR. created this Life Tributes page to make it easy to share your memories.