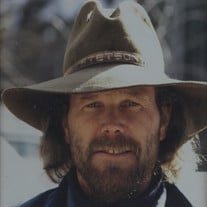 Steven Edward Oger, age 66, of Alston passed away Friday, September 4, 2015 at his home. He was born January 17, 1949 in Hancock, MI to John and Aileen Oger. He attended the Laird Twp. School and was a 1968 graduate of Baraga High School. Steve served in the US Army. He made a lifetime career as a heavy equipment operator for local construction companies before relocating to work as supervisor of excavation for Rudd Construction in Basalt, CO for 25 years. Upon retirement in 2012, he returned to his family farm in Alston to “play in his sandbox” and resurrect the family farm. Steve was a man of many talents; a passion for life, a willingness to always help a friend or stranger, and a kind and generous soul. He had a quick wit and eloquent words of wisdom. He was an avid horseman, private pilot, logger, excellent chef, and enjoyed skiing, fishing and hunting. He was a positive and encouraging influence on his nieces and nephews. His family and friends were important to him. Steve is survived by 5 sisters; Jeannie (Roy) Gourneau of L’Anse, Rosanne (Bruce) Kuivinen of Pelkie, Debra (Richard) Herrala of Baraga, Teresa (Bill) Wanhala of Pelkie and Annette (Jerry) Elmblad of Marquette, 1 brother, Larry (Nancy) Oger of Alston, step-daughter Tonya (Rich) Uren of Glenwood Springs, CO, close cousin Daryl (Susie) Maki of Alston, close friends, Mike Coffey and Tom Clisch and several nieces, nephews and cousins. He was preceded in death by his parents John and Aileen Oger, brother Ronald Oger and nephew Tom Herrala. Funeral services for Steve were held at 12 noon on Tuesday, September 8, 2015 at Mission United Lutheran Church, Pelkie with Pastor Steve Rhoades officiating. The family greeted friends at the church on Tuesday from 10 a.m. until the time of the funeral service. Baraga County area veterans, under the direction of the Baraga American Legion Post #444 conducted military honors at the church at 11 a.m. Interment will take place in the Alston Cemetery.

Steven Edward Oger, age 66, of Alston passed away Friday, September 4, 2015 at his home. He was born January 17, 1949 in Hancock, MI to John and Aileen Oger. He attended the Laird Twp. School and was a 1968 graduate of Baraga High School. Steve... View Obituary & Service Information

The family of Steven E Oger created this Life Tributes page to make it easy to share your memories.

Send flowers to the Oger family.