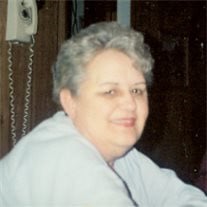 THERESA A. MORIN, 74, of Baraga, MI., passed away Monday, April 30, 2007 at Baraga County Memorial Hospital, L'Anse, following a lengthy illness. She was born in Hubbell, MI. on August 9, 1932 daughter of the late Henry and Rose (Monette) Perrow. Theresa attended school in Baraga. She married Russell "Pete" Morin in Milwaukee in 1952. He preceded her in death on December 27, 1997. The family lived in California for 11 years. They moved back to Baraga where she was employed as a housekeeper at the Ojibwa Casino for 2 years until illness forced her retirement. She was a member of Holy Name of Jesus Church in Assinins and a past member of the Ojibwa Senior Citizens. Theresa's greatest joy were her grandchildren. She loved people and enjoyed cooking, crafts, playing bingo and listening to country music. Mrs. Morin is survived by her loving and devoted daughters, Nancy (Matt) Shalifoe of Baraga, and Colleen Morin of Baraga, grandchildren, Jesse, Emily, Jason, Mattie, Jeremy, Ashley, and Jaren, 3 great-grandchildren, Jaycie, Logan, and Tyler, and brother, James (Joanna) Perrow of Idaho. Numerous nieces, nephews and cousins also survive. She was preceded in death by 2 sons, Gary, and Russell, and her brother, Russell. Funeral services for Mrs. Morin were held at 1 p.m. Friday, May 4, 2007 at the Reid Funeral Service and Chapel, L'Anse, with Father Augustin George officiating. Interment took place in the Baraga Cemetery. The family received friends on Thursday, May 3, 2007 from 6 until 8 p.m. at the Reid Funeral Service and Chapel, and Friday from 12 noon until time of the service. Thursday evening a parish prayer service was held in the funeral chapel at 7 p.m. The family has entrusted the Reid Funeral Service and Chapel, L'Anse with arrangements.

The family of THERESA A. MORIN created this Life Tributes page to make it easy to share your memories.

Send flowers to the A. MORIN family.