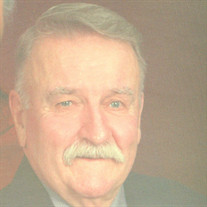 Thomas Quigley Berry, 86, of L’Anse, passed away Sunday, March 12, 2017 at Baraga County Memorial Hospital, L’Anse. He was born in Harvard, Illinois on July 2, 1930, the son of the late Maurice and Helen “Babe” (Quigley) Berry. Thomas graduated from Harvard High School before joining the United States Navy. He served four years in Jacksonville, Florida, during which time he met his loving wife of sixty three years, Yvonne “Vonnie” (Page) Berry. Upon his return from service, Thomas worked for the Chicago Northwestern Railroad, retiring as a Conductor after thirty-seven years of service. He was a member of Sacred Heart Catholic Church, L’Anse and greatly loved the sense of community within the parish, he was a 3rd and 4th degree member of the Knights of Columbus and was also a 60 year member of the American Legion in Illinois. Thomas enjoyed life outdoors, hunting, fishing and four wheeling with his family. He loved introducing his grandchildren to the woods and enjoyed the company of his dog “Bonnie”. Thomas is survived by his loving wife Yvonne “Vonnie”, children Thomas M. Berry, Daniel (Penny) Berry, Helen Solorzano and Yvonne (Wes) Walker, grandchildren Patrick, Megan, Allison, Sarah, Thomas, Rachel, Brody, Lauren and Myles and 7 great grandchildren. He was preceded in death by his parents and his brother Dr. John M. Berry. A Mass of Christian burial was celebrated at 11 a.m. Thursday, March 16, 2017 at Sacred Heart Catholic Church, L’Anse with Father Corey Litzner, Celebrant. The family greeted friends at church on Thursday from 10 am until the time of the Mass. Immediately following Mass, friends were invited to join the family for fellowship and a luncheon in the church hall. Memorials in Thomas’s honor may be directed to Sacred Heart School Fund. Graveside services will be held in Harvard, Illinois at Saint Joseph’s Cemetery on Monday, March 20, 2017 at 11 a.m.

The family of Thomas Q Berry created this Life Tributes page to make it easy to share your memories.

Send flowers to the Berry family.