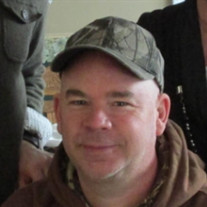 Timothy K. “Tim” Kristo, age 50, of L’Anse passed away on Sunday, November 5, 2017 at Baraga County Memorial Hospital, L’Anse. He was born in Marquette, MI on April 3, 1967, the son of Kenneth and Karen (Godell) Kristo. Tim graduated from L’Anse High School in 1985. He married the former Kristine “Krissi” VanderZanden in L’Anse on June 9, 2006. Tim had been employed at Certainteed Ceilings in L’Anse as a shift lead man. He was a member of Grace Free Lutheran Church, Pelkie. Tim had enjoyed spending time with his grandchildren, tinkering in his garage, hunting, going to rummage sales and had loved blowing stuff up. Tim is survived by his loving wife Krissi, children Fabian Kristo (Ashley) of L’Anse, Kylee Kristo (Kenny) of L’Anse, Michael (Kelli) Johnson of L’Anse, Dean Johnson (Klaire) of L’Anse and Megan Johnson of L’Anse, grandchildren Brynlee and Weston, parents Kenneth and Karen Kristo of L’Anse, brother Tracy (Vicki) Kristo of Minnesota and sister Tina (Tom) Mayo of Gwinn. Several aunts, uncles and cousins also survive. He was preceded in death by his grandparents Homer and Evelyn Kristo and Thomas and Mildred Godell, his niece Kelsey Mayo, his aunt Jean Farnsworth and his uncle Roy Godell. A memorial service for Tim was held at 12 p.m., Thursday, November 9, 2017 at the Reid Funeral Service and Chapel, L’Anse with Pastor Dave Hoskins officiating. The family greeted friends at the funeral chapel on Thursday from 11 a.m. until the time of the memorial service. Immediately following the memorial service, the family invited friends to join them for fellowship and a luncheon in the Harrington Gathering Room, located at the funeral chapel. The Reid Funeral Service and Chapel, L'Anse is in charge of the funeral arrangements.

The family of Timothy K. "Tim" Kristo created this Life Tributes page to make it easy to share your memories.

Send flowers to the Kristo family.