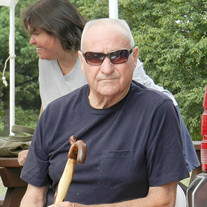 WARREN C.”JERRY” SWARTZ, SR., 72, of L’Anse, passed away suddenly, October 3, 2011, at Baraga County Memorial Hospital. He was born in L’Anse, MI on March 5, 1939 the son of the late John and Clara (Knapp) Swartz. Jerry graduated from L’Anse High School in 1957. He served in the US Army. Jerry married the former Sandra Curtis in Zeba on April 21, 1962. He had worked for the Celotex Corp. Jerry then was supervisor for the Tribal Construction Company, Baraga, He worked for the Saginaw Chippewa Tribal Construction Company as manager and trainer. Jerry then owned his own construction company, Swartz Construction Company from 1989 until his retirement in 2001. He was a member of Zeba Indian Mission United Methodist Church, Ojibwa Senior Citizens, the L’Anse American Legion Post #144, and he was a lifetime member of the Covington AMVETS. Jerry also was a member of the Keweenaw Bay Indian Community where he had served on the KBIC Council from 1968 until 1970, and in 1970 he was the KBIC Vice President. He enjoyed hunting, fishing, playing cribbage, and distributing candy to the children and was known as the “Candy Man” in the Zeba area. Mr. Swartz is survived by his loving wife Sandy, son Warren “Chris” (Jacqueline) Swartz of Baraga, daughters Joanne (Gregory) Clement of Chassell, Jeanette “Jean” Swartz (Greg Tinsdale) of Granite City, IL, and Robin Roe of Baraga, grandchildren Brandon, Chrystal, Stuart, Nicole, Cody, Keith, Stacey, Logan, and Grayson “Trouble”, brothers Wayne (Ann) Swartz, Ward (Nancy) Swartz, Roland (Cheryl) Swartz, and William (Anne) Swartz, sisters Pearl Thoresen of L’Anse, and Amelia “Dolly” Sapcut of Baraga. Numerous nieces and nephews and cousins also survive. He was preceded in death by his brother Clyde and his trusty dog “Rusty”. Funeral services for Mr. Swartz were held at 1 pm, Thursday, October 6, 2011 at the Reid Funeral Service and Chapel, L’Anse with Pastor Steve Rhoades officiating. The family greeted friends at the funeral chapel on Thursday from 11 am until the time of the funeral service. Baraga county area veterans, under the direction of the Baraga American Legion Post #444 conducted military honors at the funeral chapel on Thursday at 11:30 am. Following the funeral service, the family invited friends to join them for fellowship and a luncheon at the Ojibwa Senior Citizens, Baraga.

The family of WARREN C. "JERRY" SWARTZ SR. created this Life Tributes page to make it easy to share your memories.